Bob Hart, executive director of the Lane County Historical Society, could double as actor Richard Dreyfuss, but, in terms of public regard, Rodney Dangerfield might be the better fit for museum folks such as him.

They get no respect — historically speaking, that is.

In 1937, the museum was promised downtown Eugene’s old post office building, but then along came a war, and the government needed the space, which it rented until 1957, at which point the building was torn down.

When Hart took the historical society reins in 2003, the museum at the Lane Events Center already was so run down that he found a salamander living beneath a catch basin used for the leaky roof.

And the Lane County commissioners’ unanimous vote in March to support moving the museum off the fairground property was one of those good news/bad news deals; nice that they granted the society’s desires to relocate, but telling that nobody thought the museum had a future at the fairgrounds.

I mean, come on, when does this discordant bunch vote 5-0 on anything?

All of which brings me to my tour Monday of the for-sale downtown post office as a possible future home for the historical museum.

Frankly, it would be a beautiful fit, a way to literally meld history with history while serving it up to the public with a bit more panache.

“It’s really our best shot,” says Hart, who also is director of the museum.

The New Museum Committee also is considering a new building as part of the Eugene Water & Electric Board’s Riverfront Master Plan. But Hart prefers the post office location at Willamette Street and West Fifth Avenue. Why?

Location. “It’s on the most historically intact block in the city,” Hart says. “We could get some foot traffic.”

Size. At 28,500 feet, it would more than double the museum’s current location, where the building is wedged, like an afterthought, between the Lane Events Center’s massive main building and a parking lot.

Climate control. The current museum, built in 1951 with an expansion in 1959, leans to the cool and damp side, Hart says, even if the roof was replaced after he arrived in 2003.

Ambiance. The old post office isn’t the Louvre, but it has high ceilings, marble, artsy moulding and, of course, the 1940s Oregon-esque murals by Portland artist Carl Morris. And, at 72 years old, it has a bit of history itself.

“We’d be preserving a building that deserves preserving,” Hart says, pointing out that the post office is the oldest brick building in Eugene.

“It’s a starting point for making a beautiful place where people can come to get excited about the history of their county,” says Rachel Auerbach, a designer with Nir Pearlson Architecture Inc., who along with firm namesake Nir Pearlson led Monday’s tour by 18 people.

Imagine a building that maintains its own historic personality but allows for ways to showcase the county’s past at the same time. On the north side, a cafe and gift shop; on the south, a floor-level extension featuring the 1853 “Clerk’s Building,” the oldest structure in Lane County.

Imagine two floors. A library upstairs. And a mezzanine level wrapped around a sort of “grand room” first-floor for major exhibits.

“We want to protect the historical elements of the building,” says architect Pearlson, whose firm has done a “preconceptual” design. “I see taking marble from the bathrooms and using it other places, incorporating some of these historic mailboxes in our cloak room.”

A move to the new location, of course, is a huge financial undertaking; the government wants $2.5 million for the property. The cost to convert the building to its new use is expected to be in the $3.5 million range. And a move necessitates other costs.

Those are big numbers for a museum that pays a $1-a-year lease to the county and operates on a $225,000 annual budget funded by a sliver of transient-tax revenues. And you wouldn’t expect the county to roll up its sleeves too far on this one.

But the post office building won’t even be available for three to five years, which, Hart figures, allows plenty of time for running a capital campaign and seeking grants. And that’s still sooner than a building would get done as part of the riverfront plan.

“We have a lot of work to do,” says Alice Parman, historical society board member and museum consultant. “We’ve got to get museums on people’s radar.”

Hart has taken steps to doing that; he understands that history isn’t just a covered wagon, but might be a blog site for the museum’s recent Tie Dye & Tofu Exhibit. That’s good.

And so would moving the museum to the old post office to better connect people to their own pasts and to give that history the respect it deserves.

“When you understand a place,” says Jim Giustina, head of the historical society board, “you’re more likely to invest in it.”

Likewise, when you invest in it, you’re more likely to understand it. 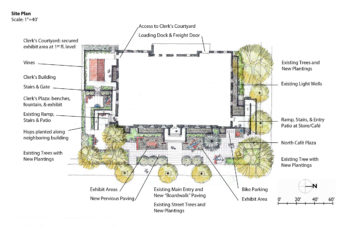