Give it up for ol’ Ben again. His waste-not, want-not maxim proves “spot on” in Rob Handy and Julie Hulme’s new one-bedroom, 800-square-foot home in north Eugene.

Every square inch so counts in this hybrid timber-framed cottage, Handy and Hulme say they lack for nothing with livability. And this in a full-on dwelling smaller than many apartment units.

“It fits us,” she continues. “It’s on a human scale. We live a very simple lifestyle, and it fits us perfectly. It has everything.”

In fact Hulme, a longtime teacher at Edgewood Elementary School in Eugene, and Handy, a Lane County commissioner, look at their home more as a spacious retreat than charming but cozy quarters.

The property helps, too: a 2-plus acre lot with flowers, vegetables and fruit trees. But with abundant windows to absorb the verdant outdoors, with sloped ceilings of Douglas fir beams and hemlock decking, and with upscale but soothing finishes like reddish marble for the walk-in shower and a streambed of earth tones in the honed-granite kitchen counters, the house itself is “very calming,” Hulme says.

“It’s like a sanctuary-type feel to it,” she expounds. “We both have very public lives, so it’s very nice to have that kind of sanctuary space. It’s just lovely for us.”

Many baby-boomers dream of downsizing to a small home with upscale quality. But the funny thing for Hulme, 56, and Handy, 55, is that they’re actually “up-sizing.”

For 28 years, the couple had lived in a 620-square-foot hodgepodge house — likely dating to the 1940s — on the same property. “We had a bedroom that was literally a ‘bed’ room,” muses Handy, who worked as a landscaper before becoming a county commissioner. “We crawled into bed. We came in (from) the bottom, because there was literally no room on the sides. It was an old tool shed.”

The old home would become a giant recycling project before finally demolished. But first, Hulme gathered ideas for a new house from prominent author Sarah Susanka, an architect who studied at the University of Oregon.

“I have all of her books. She was one of my inspirations,” says Hulme in reference to Susanka’s “The Not So Big House” series.

Then, at the home show in Eugene, Hulme found a visionary soulmate in Pearlson. “Within a minute I knew, ‘This is the man who’s going to build our home,’” Hulme says.

Before starting in, Pearlson spent time with Handy and Hulme, observing how they lived and asking about their lifestyle values. What emerged was the outline for a light-footprint, locally sourced, hyper-energy-efficient home with sustainable materials and quality conveniences befitting a lifetime home.

“This is our forever home,” Hulme explains. “We thought about things. People said, ‘Why don’t you build two stories?’ Because when I’m 85, I’m not sure I’m going to be able to get upstairs.”

To give Hulme and Handy their one small step up in square footage but giant leap in livability, Pearlson and his assistant designer, Rachel Auerbach, maximized “connectivity” between spaces.

“Connectivity results in expansion,” he explains.

From any one place in the great room, you can see to the other. Spaces are “separated” by physical elements, such as the wood stove that helps delineate living room from kitchen, and the curved dining bar that helps distinguish kitchen space from the front entry.

“That sense of exposed structure helps with the openness as well,” Pearlson says.

What Hulme loves “is that feeling of having spaciousness, and yet having these cozy little intimate spaces, too. It feels like someplace you want to be.”

French doors, each double glazed in a rainwater pattern, separate the home’s guest room from great room. But when left open, “the two rooms become one,” Pearlson says.

Even when closed, transom windows above the guest room’s doors create a sense of expanding volume between both rooms.

Perhaps most striking, the modest-size bathroom seems to expand before your eyes. First comes a curved, architectural glass wall, followed by a single sink pedestal, entry to the marble walk-in shower, stepped-up ceiling, and window view to the garden.

In terra-cotta tones, the marble shower with bench seat reminds Hulme “of walking in Utah, all of those big red rock canyons.”

Twenty-six windows connect earth and sky to indoor spaces, bringing daily joy to a couple who grow much of their own food and lace their grounds with flowers and fruit.

“So much of our life revolves around being outside,” Hulme says while sitting on the home’s cedar deck, which also merges indoor/outdoor living spaces on two sides of the house.

With the kitchen windows, Hulme says she feels like she’s “out in the garden cooking.”

“And when you’re in bed, it’s like, ‘Wow.’ It’s sort of like being in a tree house. You’ve got clerestory windows up there that bring in beautiful light in the morning.”

Heart of the matter

But her favorite connection of all in the house?

“There’s no separation between the kitchen and other (great room) spaces,” Hulme says. “People can hang out while you’re cooking, so you can still have fun cooking. … I feel like I’ve died and gone to heaven.”

“She (Julie) is one of these amazing people who, when she’s tired, she wants to go to the kitchen and cook,” he elaborates. “That helps her relax.”

Spot on, that is, for splendid livability. 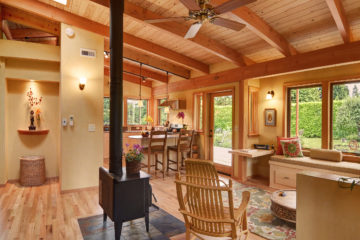